How Many Car Accidents Are There in the USA Per Day?

Every year, car accidents cause more injuries and deaths than any other type of personal injury incident. With hundreds of thousands of vehicles on the road, the odds of getting into a collision in your lifetime are frighteningly high. Even the most prudent drivers can’t always avoid crashes with distracted and reckless drivers. Eliminating car accidents in the U.S. would save thousands of lives and billions of dollars. Identifying how many accidents occur per year takes an analysis of annual data from the National Highway Traffic Safety Administration (NHTSA).

Every year, NHTSA issues a Motor Vehicle Crash Overview. This overview gives data collected from around the country on the number of reported annual car accidents. Keep in mind this does not include collisions that drivers are able to keep quiet or hit and runs that no one reports. NHTSA keep track of how many people died or suffered injuries in these collisions, as well as factors that contributed to the crash, such as speeding or alcohol. Here is a breakdown of the number of reported crashes over a five-year period: 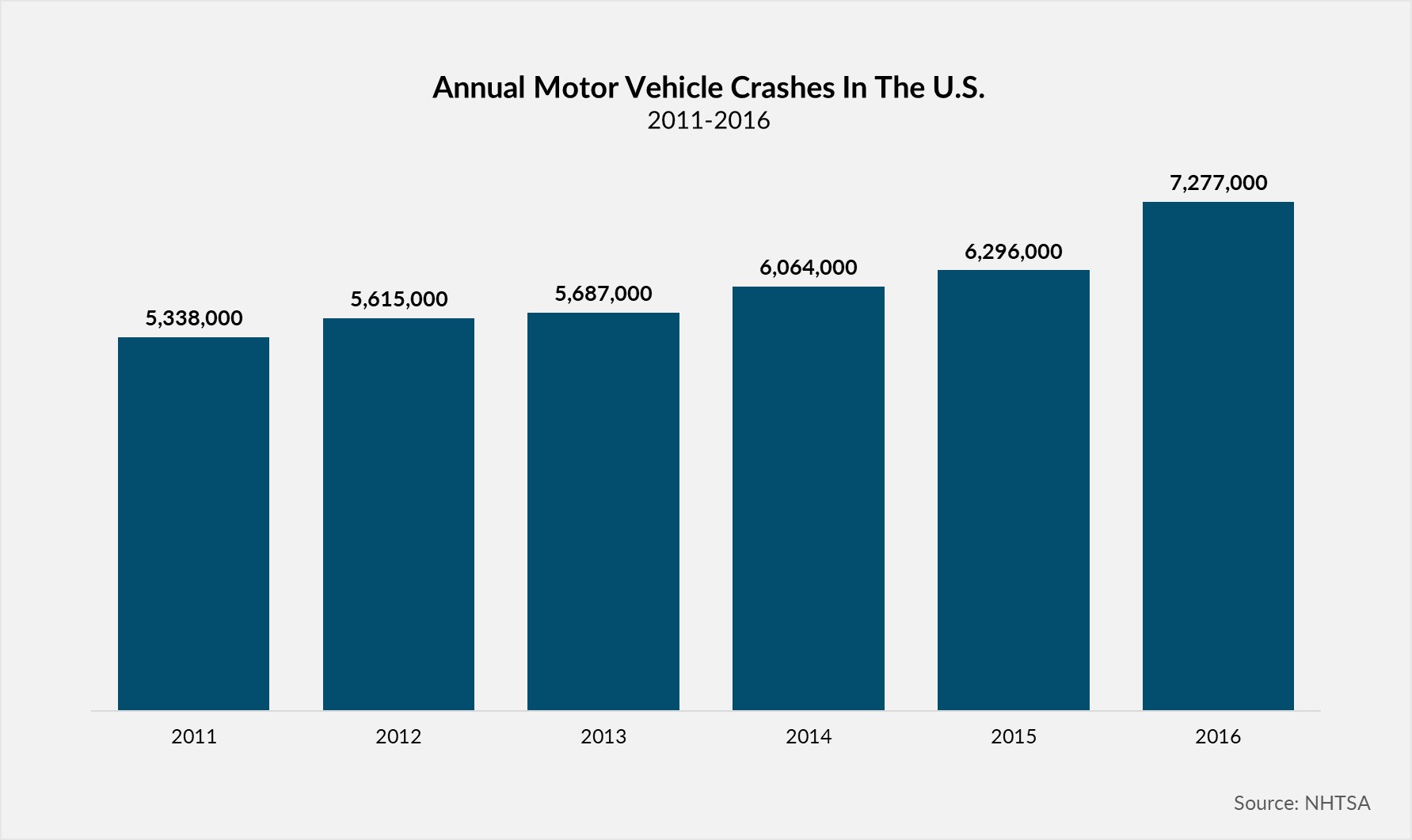 Upon averaging the car accident data from 2005 to 2016, one can estimate that 5,338,000 car accidents occur every year in the U.S. This amounts to around 15,913 accidents per day. This represents the number of collisions between vehicles or vehicles with fixed objects – not the number of vehicles involved total. The U.S. pays about $230.6 billion in car accident costs annually – an average of $820 per U.S. citizen. Note that in the last five years, the number of accidents has risen by almost one million. Unless something changes, the odds are certainly stacked against drivers today.

Injury-related deaths are responsible for the deaths of more people ages 1 to 44 than all other leading causes in the United States, including infectious and non-communicable diseases. Almost 200,000 people die from fatal injuries every year – the equivalent of about one person every three minutes. National averages report about 37,000 crash-related fatalities every year. This breaks down to about 101 deaths per day in the United States. An additional 2.35 million suffer injuries or disabilities annually – about 6,438 per day. The National Safety Council reported an estimated 4.6 million crash-related injuries and 40,200 deaths in 2016, a jump of 6% from 2015.

In 2016, 1,129 people died in car accidents in Ohio. This is a slight increase from 1,110 fatalities in 2015. The majority of these deaths occurred on urban roads. Police linked 313 car accident deaths to alcohol impairment and 207 deaths to speeding in Ohio in 2015. Drivers and passengers weren’t the only victims – 116 pedestrians and 25 cyclists in Ohio also died in 2015. Every year, thousands of people experience life-changing car accidents in Ohio.

Almost everyone in the country knows at least one person who has suffered a loss or injury in a vehicle accident. If you’ve become a victim in one of the thousands of annual car accidents in the U.S, trust in a Dayton personal injury attorney. You may be able to recover your damages.