The Top 100 Most Dangerous Intersections in Ohio

Posted in Accident Statistics on February 11, 2016

Each year in Ohio there are hundreds of thousands of traffic crashes that occur on our roads.  According to the Ohio Department of Public Safety, in 2014 there were 282,368 traffic crashes and 1,008 people were killed in motor vehicle crashes. Analyzing data from the Ohio Department of Public Safety for the years 2013-2015, we wanted to find the most dangerous intersections in the state. If you were injured in one of these intersections, don’t hesitate to call one of our Dayton car accident attorneys for a free consultation.

The map below shows the locations of the 100 most dangerous intersections in the state. We suggest zooming in on the map as well as to hover over the circles to get additional information including the name of the intersection, city, a number of crashes, injuries and (if any) fatalities for that location. As you can see, there’s a cluster of circles in the Columbus area since 37 of the top 100 were located there.

The 10 Most Dangerous Intersections

Number 1 on our list is the intersection at Cleveland Ave and Morse Road. The intersection has 16 lanes and sees more than 55,000 cars cross through every day. This combined with a 45 mph speed limit greatly increases the chance of an accident involving injury. While it is a distant 2nd in the number of accidents in the last 3 years at 133, the number of injuries (66) and fatalities (2) make it #1 on our list.

According to the U.S. Department of Transportation Federal Highway Administration, roundabouts are supposed to be safer. Despite this, the intersection at Cemetery and Main had the highest total number of accidents. The unfamiliarity of roundabouts to Hilliard residents, its proximity to many schools and shops, as well as the high traffic volume perhaps means that there are too many cars and pedestrians for a roundabout to adequately decrease the number of car accidents. 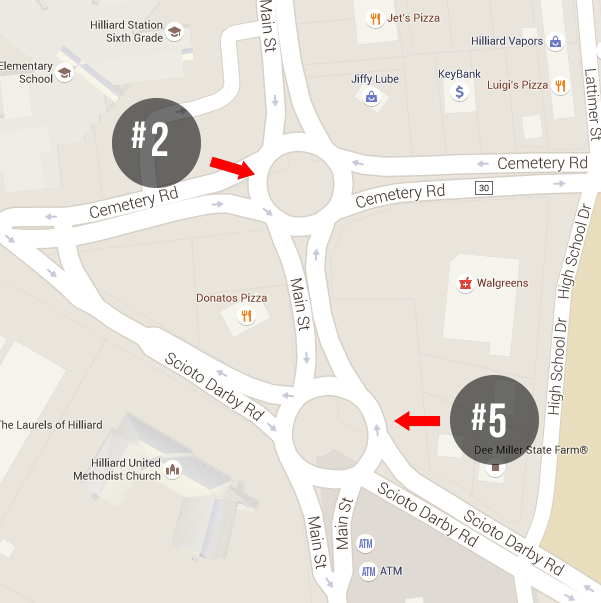 The Google Maps car even caught one of these car accidents on camera when mapping out the intersection!

Its proximity to a large shopping center, along with its traffic volume of 46,000 cars per day (we’re sensing a pattern here) greatly increase the chances of there being an accident. While the overall number of crashes was low compared to other intersections, the high ratio of crashes involving injuries earned it the #3 spot on our list.

Despite having the fewest total accidents of any intersection in the top 5, approximately 89 percent of those accidents involved injury. It’s unclear why this is the case, but the bike lane on such a narrow road could be one explanation. Sideswipes and unintentional collisions could be common.

Less than a football field’s length from the #2 intersection on our list, Main St. and Scioto Darby Rd. also involves the use of a roundabout. Previously stated potential troubles that Columbus residents might be having is with the design. Confusion on when to yield, to cars and pedestrians alike, can be another reason why there are so many accidents here.

Intersections with highest number of accidents by City

Columbus is home of the intersections with the highest accident totals in the state including 37 of the top 100 in the sate. Columbus had four intersections in the top 10, three of which involved Morse Road. Every other Columbus intersection in the top 10 has the same problem, and experiencing such high traffic volume every day greatly increases the chances of an accident occurring.

Columbus intersections also had the most accidents involving injury, and one potential reason for that could be the 45 mph speed limit running along Morse Road. As previously mentioned, three of the four Columbus intersections in the top 10 involved this stretch of road, and the high speed limit could be a cause for the injuries sustained, even though only four accidents at Cleveland and Morse involved pedestrians.

The intersection with the most accidents from 2013-2015 is in Hilliard, a suburb of Columbus with a population of a little over 30,000 people. Despite this low population, the intersection of Cemetery Rd. and Main St. saw 218 accidents over this period, and contrary to what national statistics suggest, many local residents and law enforcement blame this on roundabouts. People in Hilliard appear to not be used to driving in one or are unfamiliar with how it works, and so is the cause of many accidents.

The city had the intersection with the third-highest number of accidents as well, and it too is a roundabout. The intersection of Cemetery and Main sees nearly 10,000 cars during its peak hours alone, so perhaps the two roads are simply too high volume for a roundabout to sufficiently cut down on accidents, especially so close to a school in a small city. Or maybe people need more time to get used to it; there were 89 accidents here in 2012, compared to 64 in 2014. The roundabouts at both intersections were fully completed in 2011.

The Hunt and Plainfield Road intersection doesn’t have a lot of lanes, but that might be part of the problem. The city’s permanent population is approximately 12,000 people, which makes it the smallest city in the top ten. But it’s in close proximity to Cincinnati, so that number stretches to 55,000 during the day thanks to the 2,000 businesses within the city limits. And this intersection leads to the on-ramp for the Reagan highway, so this many cars and so few lanes can lead to potentially hazardous situations during rush hour.

Another high-volume road in a smaller city, the Mentor Ave (US 20) and Reynolds Road (US 306) intersection sees more than 54 percent of their accidents caused by fender-benders or following too closely. Many who drive the road routinely attribute this to confusing traffic signals, especially when heading west on Mentor with the intention of turning north (right) on Reynolds. Those who don’t know they’re supposed to keep moving stop, and when someone following doesn’t expect that, a rear-end accident happens. The city of Mentor is taking steps to prevent this, but it still happens frequently.

The major intersection at the heart of town, Winton and W. Kemper Road saw the third highest accidents involving injury. One reason for this could be that the intersection is right next to a high school serving more than 1,500 students and a shopping center. High-volume pedestrian traffic coupled with car traffic at peak hours can create a tricky situation.

The second smallest city on the list, nearly 25 percent of the accidents at the Mayfield and Richmond Road intersection involved teenagers, more than any other in the top ten. This is not to say that all teens in Lyndhurst are bad drivers, but inexperience has been known to be a contributing factor in many crashes nationwide.

Dayton had 11 intersections with 30 or more accidents, with Airway Road and Woodman Drive in the nearby suburb of Riverside having the most. It is a highly trafficked intersection with turn-off ramps and a large shopping center nearby, and as is the theme with the other cities, more cars equals a higher chance of a wreck.

In order to determine the most dangerous intersections, we looked at total number of crashes as well as the number of injuries and fatalities. For our assessment, we assigned the following point system:

If you were injured in any of the following intersections, you may be eligible for compensation. Contact our Dayton personal injury attorneys at The Brannon Law Firm, we offer free consultations and free case evaluations.